Located almost 33 km from Almora and a few km from Nainital, the sleepy hamlet of Himalayan wonder called Binsar has no qualms about letting its more popular neighbouring towns bask in the limelight. And why should it? As the summer capital of the former Chandra kings for more than a millennium (7th century to 18th century AD), Binsar has long seen its glory days. No wonder, then, that today, it stands tall as one of the most regal yet conspicuously serene hill stations in Uttarakhand.

And it is precisely for this reason, and the reasons we are going to detail below, why Binsar should feature on top of your weekend getaways in Uttarakhand list. It boasts of a wildlife sanctuary, mysterious ancient temples, picturesque hikes and trails for the perfect adrenaline rush, the resplendence of Kumaoni Himalayas, and of course, a breath-taking calm rarely experienced in life. Need we say more?

Here are the top four reasons that make Binsar such a surreal and unforgettable weekend experience: 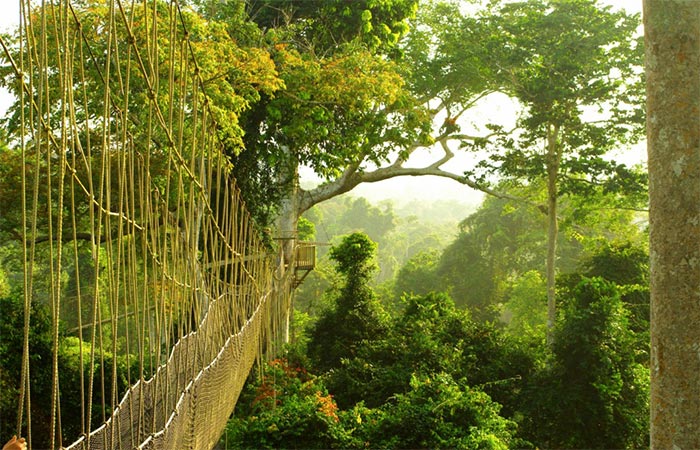 Apart from the lovely locals who will leave no stone unturned to make your Binsar experience a memorable one, you will always have Himalayan bears, jungle cats, leopards, foxes and over 200 species of birds to keep you company. No, they won’t be dining with you or wreaking havoc where you stay. Rather, you would be lucky to spot them in their blissful, undisturbed existence at the Binsar Wildlife Sanctuary that is spread over 46 sq. km. of lush green Jhandi Dhar hills. For the best experience, we recommend staying within the sanctuary. Nature from this close is as surreal as it gets!

2. For some trekking on your mind

If you are someone who has never been on a trek, then treks in Uttarakhand don’t get as easy as the ones in Binsar. For first-timers, hiking through dense vegetation and gracious slopes while being greeted with unbesmirched views of the great Himalayas is often a stupefying experience. Binsar’s treks specialize in exactly that. You can always venture through the oak and rhododendron forests in the sanctuary for roughly 3 hours before reaching Zero Point – a breath-taking vantage point 7800 feet above the sea level from where peaks like Kedarnath, Trisul and Nanda Devi are clearly visible. For those who yearn for more, a further 5-6 hours will take them along the old horse trail to Jageshwar where stunning panoramas of the Nepal Himalayas and an extremely important ancient temple lie in wait.

3. And then there are temples older than history

Like the one in Jageshwar which is famous as one of the 12 Jyotirlingas in the world and as an important archaeological wonder of ancient India. This temple was constructed in the 13th century in honour of Lord Shiva, and is in fact a complex of 150 temples surrounded by a cedar forest. Pilgrims to Mount Kailash in Tibet often pay their homage to the Jageshwar temple on their way. Other famous temples in Binsar include the Kasar Devi Temple and the Golu Devta Temple. If you ever wanted to invoke your feelings for the divine, then Binsar will not disappoint you at all.

Given the surrealism of all the above-mentioned points, we can only recommend that you enjoy the best of Binsar by putting up at the Tree of Life Grand Oak Manor – a historical wonder in itself. Constructed in 1856 by the General Sir Henry Ramsay, the one and half century old manor is a fine example of British architecture, complete with its luxurious and rather charming colonial interiors. Who says time travel does not exist?

What was once a summer abode of the kings is now the perfect weekend getaway to rejuvenate yourself and rekindle your love for travel and the hills – all in a finely surreal yet kingly manner.