How To
/
Others
/
Did Facebook Ruin Your Marriage Or Was It You?

Social media has been cited as causing the death of many marriages. People spend more time online than ever before, convincing themselves that the shallow interaction they have with a screen can replace real, meaningful conversations with the people who are supposed to mean the most to them. If you think Facebook is to blame for the loss of your marriage–and around 1/3 of current divorce cases now seem to at least mention social media as one of the causes–it’s important to ask yourself a few questions before you sit down with a divorce attorney to start diving your assets.

What Social Media Behaviors Are Contributing Factors in Divorce?

The existence of social media isn’t causing divorces all on its own. If your marriage is on the rocks, however, it’s very possible that you’re engaging in some uncomfortable behaviors that are hard on your marriage and made worse by your continuing social media presence. 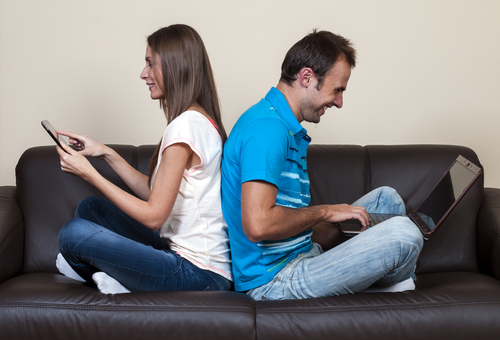 “Keeping up with the Jonses” syndrome. Everyone on social media seems to have it better than you. They show plenty of pictures of happy, perfect family members and statuses that indicate that they enjoy one another’s company all the time. You aren’t nearly that happy! What you have to remember, however, is that social media is everyone’s “best.” You don’t typically post about the times when you’re fighting with your spouse and miss a family dinner, or the two of you were late for church again because of your spouse’s failings.

Ignoring your spouse in favor of your device. Smart phones are an excellent tool that allow you to stay connected wherever you go. They’re also a tool that can be used against your marriage. One study suggests that people check their phones as much as 110 times a day–and that may rise up to six seconds in the evenings, when work responsibilities are less of an issue. This habit of paying more attention to your phone than your spouse can cause serious damage to a marriage, especially if your spouse feels ignored or neglected as a result.

Cheating. Social media makes cheating easier than ever before. What starts as a simple conversation between two people quickly turns into flirting, sexting, and worse! If you’re prone to cheating behaviors, it’s critical that you recognize it and take steps to keep your attention where it belongs: on your spouse. Otherwise, social media is all too likely to help lead you astray.

Correcting the difficult behaviors that have been caused by social media can’t happen overnight. There are, however, several ways you can get things back on track–and avoid that trip to a divorce attorney–without having to give up your social media accounts altogether.

Opt out of complaint discussions. Instead of dwelling on what your spouse is doing wrong, commit to thinking harder about what they’re doing right! Ideally, you can even use your social media posts to build them up instead of tearing them down.

Check your yardstick. Acknowledge that the Jonses are posting the best, brightest moments of their marriage to social media. You can’t compare those moments to your worst ones!

Social media is an excellent tool that allows you to stay more connected to people who are really far away from you. Using it correctly is the key to a long, happy marriage. Skip the trip to a divorce attorney by checking your social media behaviors and making sure they’re in line with the way you really want to treat your spouse.

Christopher is an avid blogger from Tulsa, Oklahoma who is passionate about encouraging healthy family values for all communities while working with the Gorospe & Smith Tulsa Divorce Attorney Firm in his own community.